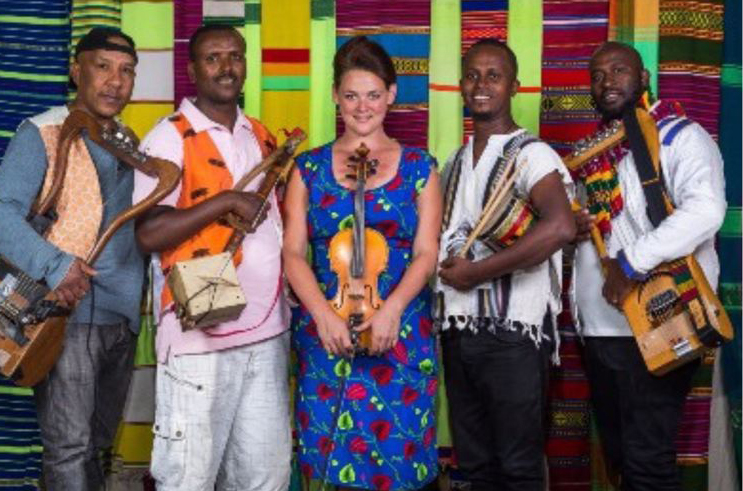 The Augusta Heritage Center, located in Elkins, WV, presents Qwanqwa—a supergroup of Ethiopian musicians. The band will perform at the Myles Center for the Arts at 7 pm on Thursday, November 10, 2022. Tickets are $10.

Brought together by a shared passion for the power of Ethiopian music, this group shines an experimentalism based in the virtuosity of rooted traditions. With swirling masinko (one-stringed fiddle), wah-wah-violin, bass krar boom, and the unstoppable rhythm of heavy kebero (goat-skin drum) beats, powerful traditional lead African diva vocals, QWANQWA keeps the people wrapped in celebratory attention. After making a splash at world renowned festivals Roskilde and WOMEX, and after 3 European tours under their belt,  this world traveling ensemble is hitting the road for a MacArthur Foundation backed Debut US tour in 2022

QWANQWA draws inspiration from East Africa regions of Ethiopia and beyond. Delving deep into regional beats and moods, the repertoire ranges from a trance-like song of the Eritrean tribe of Blen to a Somalian rock number to Mahmoud Ahmed sing-a-longs. The music is characterized by tight arrangements and extended experimental moments. The live show ranges from intimate to wild, from whispery conversations to full blown rock show, and it is hard to believe these psychedelic sounds are coming from traditional harp and violin. It is driving, powerful, and different than anything else coming out of Ethiopia at this current Golden Age of Ethiopian music.

The ensemble was founded in 2012 by American violinist Kaethe Hostetter, who first worked in Ethiopian music as a founding member of critically acclaimed Debo Band. Since relocating to Addis in 2009, she has participated in numerous exploratory and professional projects, as she honed her sound and immersed herself further into the culture of her surroundings. In this sense, QWANQWA, the Amharic word for “language,” is a project creating dialogues between cultures.

About The Augusta Heritage Center

Mountain Arts District-member Augusta Heritage Center is known nationally and internationally for its activities relating to traditional music, folklife and folk arts of many regions and cultures. A Center of Excellence, AHC offers ten week-long programs featuring instruction in many traditions of music, dance, craft, and folklore. Concerts, dances, a festival, and other heritage arts events are also part of the Augusta experience.